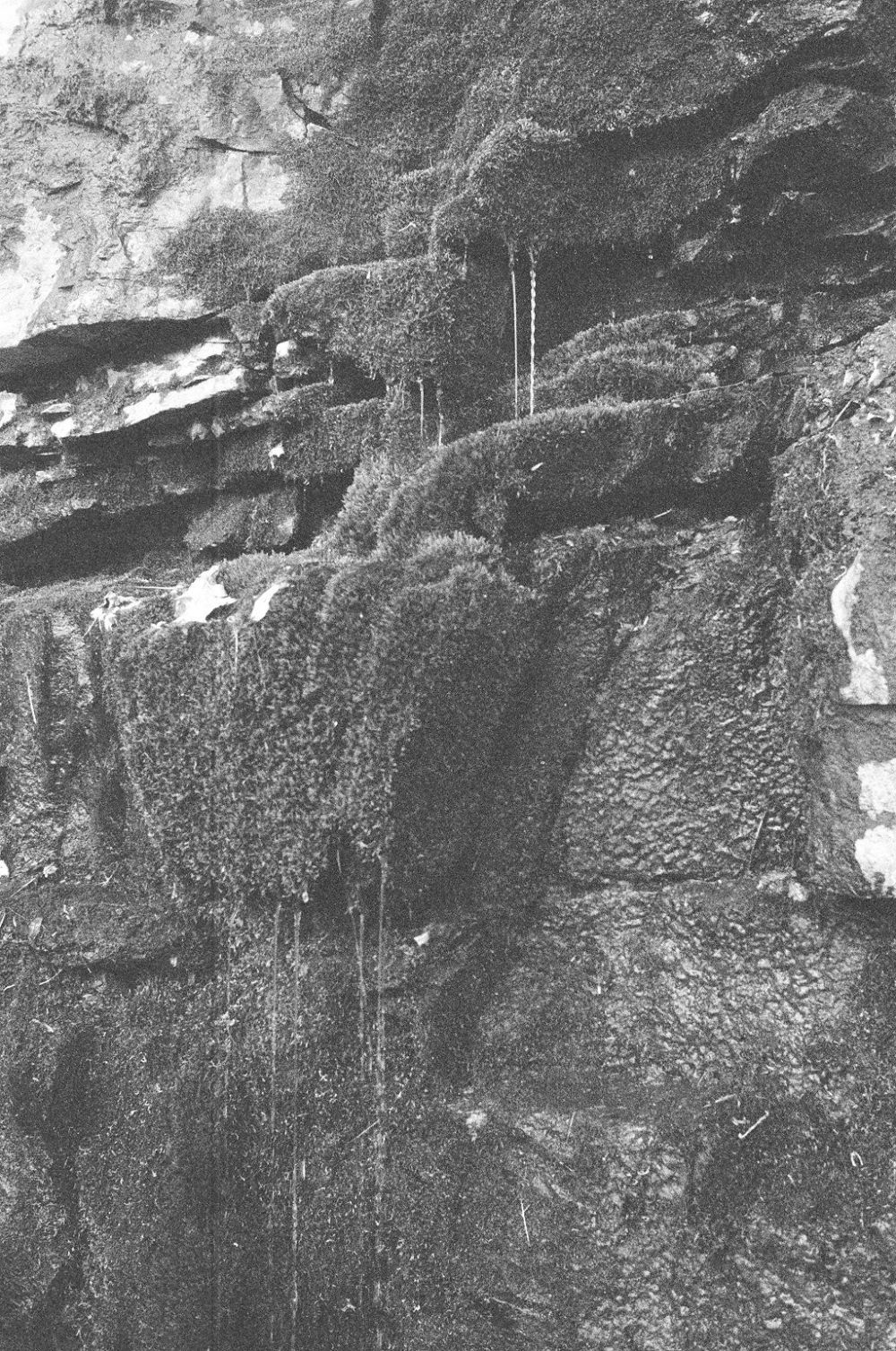 There could be an eyeless place. Ferns await the warmth of the sun to curl upward and spread like a palm opening. Eyeless where taxis turn illegally and speed off into the night on their missions. In Gaza, sand and broken parched stones from horizon to horizon. Smoke in the distance, a freighter on the Mediterranean makes its way toward the Suez canal. This is eyeless. When a chick stumbles down the door of the henhouse, when the chickens roost in the branches of the trees at night to avoid the jaws of predators, eyeless.

What put out the eyes in this place? The lights? Why this blind creeping from thing to thing, place to place, like the wet mouth of a child that must taste everything? The fern and the taxis, the sand and the freighter, chickens rolling like smooth pebbles over the palate. 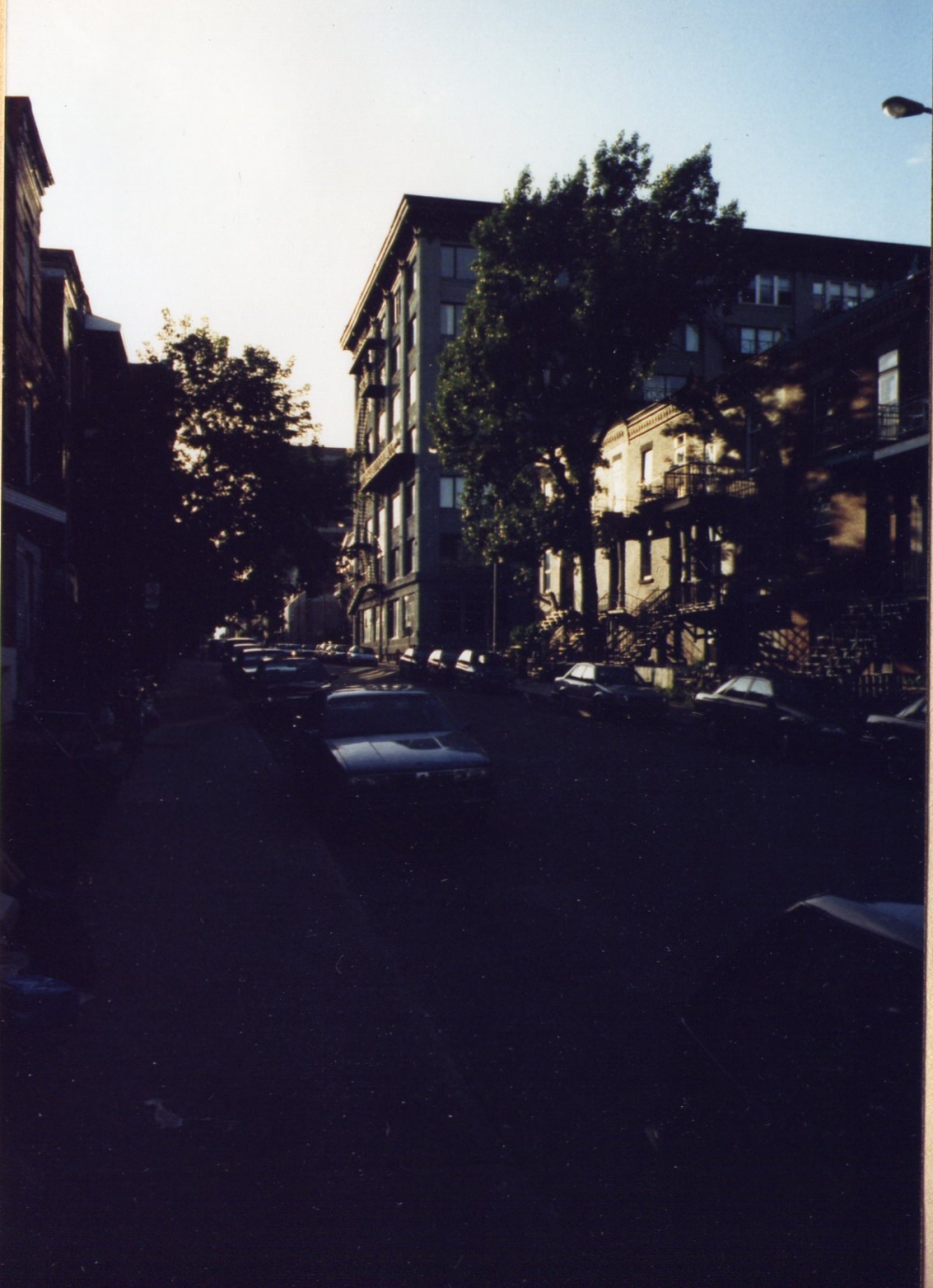 Out this door and down this hall
To the entrance, the street
Walk the dark streets at night
Where the leaves of trees are drifting
First, toward gold, and orange, from green
Then, from branch, to ground.

The streets of this city are alive
With people; whether asleep or awake
Their breath tangles in intersections
Their sighs hover by depanneurs
Their voices travel in wires, in air
Impinging, impinging on us.

On the streets, in the rooms
Eyes and words and bodies move
Entangle, engage, and depart. 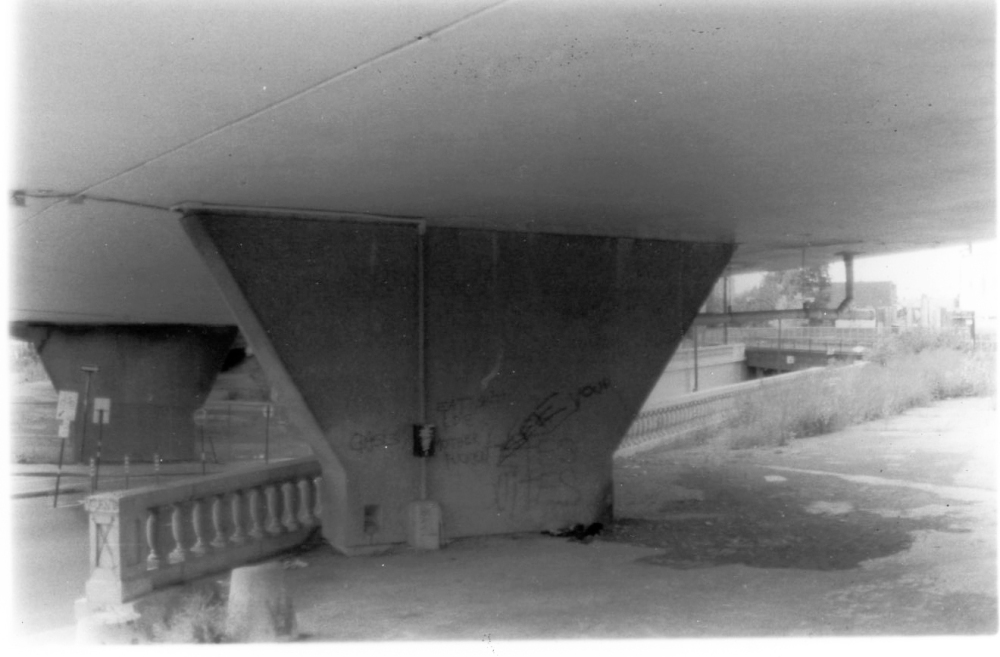 I’ve been pretty much knocked out by a walk to Parc Avenue and back. By the strings of glowing plastic jack-o-lanterns and real pumpkins piled up in front of stores on Bernard. There is something like death riding the wind tonight, it’s a cold and final kind of breeze without a whisper of summer in it. Maybe the wind or the darkness of night at six, maybe the crazed glare of cars jockeying for position at the intersection. Maybe just me, because I’m alone with a head full of stuff I’d rather forget. There. That’s death. Cold but I’m not cold, just flashing from signal to signal, from the wind to the masks in windows to Janalyn and her kids in Gigi’s. She looked tired. Beat after a long day and already it’s dark out. They don’t see me, I go on, flashing on election posters, key cutting place and no-one at Romolo, she’s got no time now not with kids and a car and school now. The old bank at the corner’s got fresh cement at the back garage and it’s going to be a butcher’s it looks like.

Parc Avenue’s as bleak as it gets. People like leaves blown in an autumn wind. Poor people, I mean poor like the SAGE pawnshop (vinyl records for sale, mostly classical). Poor like another closed bank branch, the Laurentien’s moving on down the street. Capital flows. Another ugly, empty dump. Poor like the dollar stores where the shelves are half-empty and high school boys hang out talking. Where I pick up this notebook, a stopgap and only a dollar. Poor like Didi Beigne and Le Spot – cheap eats for poor people like me. Well, better than that biker sexist hangout Gigi’s. Gigi and Didi and Mrs. Montreal got nuthin’ on me, man. I’m invisible (poor) going home and ghostly, even Amanda doesn’t see me on her way to buy groceries. I wonder where that crappy electronics store used to be. Not the shoe repair, it and the man inside it look as old as my grandpapa’s old place. Was it where the bike shop is? The baby clothes place? Yeah, around here. And I’m ghosting along in the wind with a heart as full as anything. It always happens this way when I’m invisible. When I’m walking on my own, for my own obscure reasons. 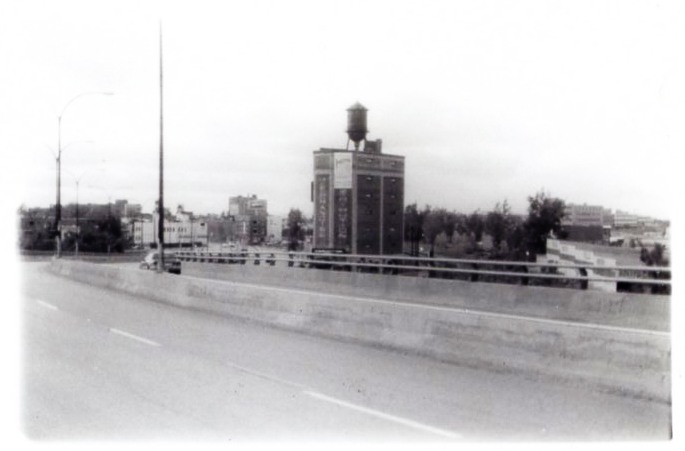 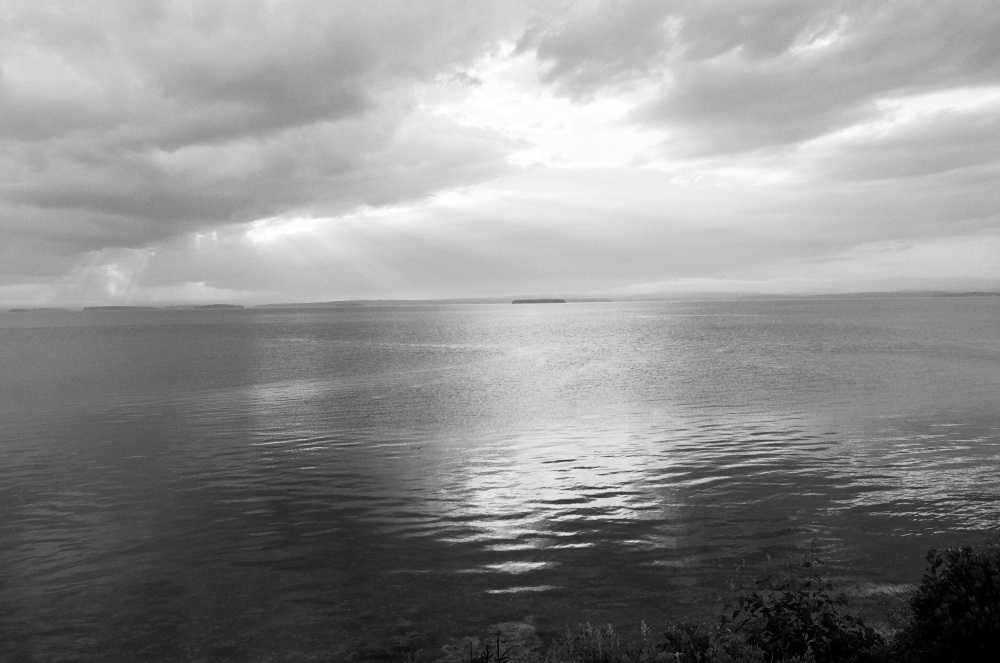 Truth sounds
A great whale
With a sea green splash 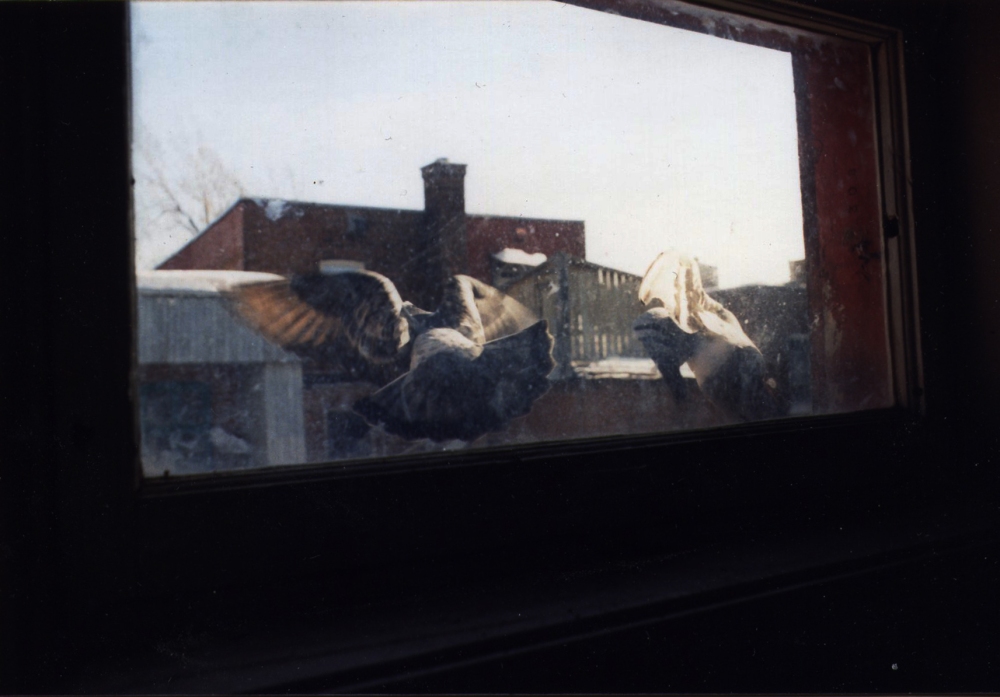 Desire, love
Leans like a body builder
Against the mysterious apparatus
Of these times
Dizzy as a pregnant woman
Plunging into an uncertain future
With some man
Who cares, who doesn’t care
How can he ever know
What total commitment dwells
In her womb?
Hope
The long deferred
At each moment of possibility
Trembles with something like pain
Something like bliss
The promise of a flower
Fragile, yet insisting on itself
The muscle
Strengthening, stretching, growing 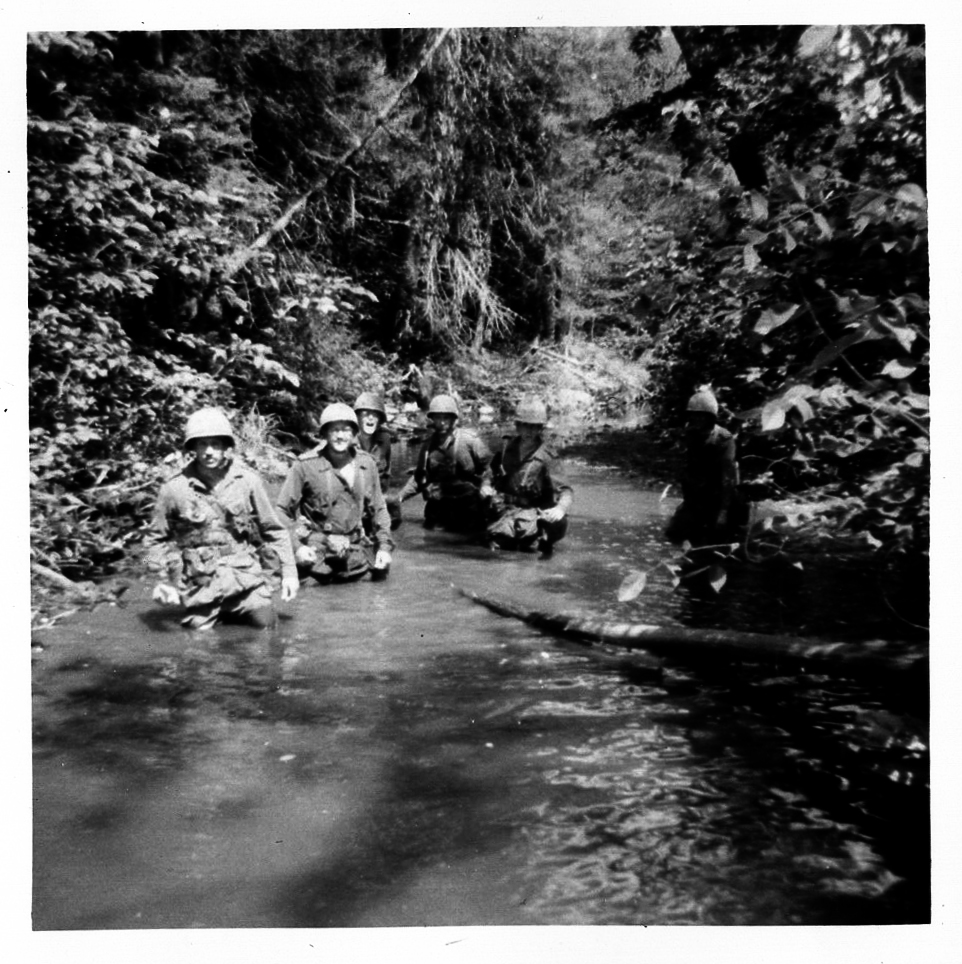 Tapes and tapes upon tapes. I’ve made myself a fairly useless man, in some ways. It’s almost four in the morning and I’ve just recorded The Longest Day. World War Two as seen by ten-year-old boys. The memory’s there . . . not of the war, but of the film a boy watched, mesmerized, on a black-and-white television. “But you were a war nut,” Victoria said. “You told me that yourself.”

Waves of men march forward into oblivion – into a kind of crazy sped-up quicktime, lives truncated like Coles Notes or Reader’s Digest versions of the real thing. Such is war. And when we see the youth use themselves up on drugs, or crime, we say it’s such a waste. Why yes, they could’ve been soldiers. These days it’s all a fucking war anyway, the obedience to orders, the conformity, the fear. Especially the fear.

There are tapes and tapes upon tapes, and there are actual memories. The difference lies in what the body remembers. Was it a long war, or was it a short war? 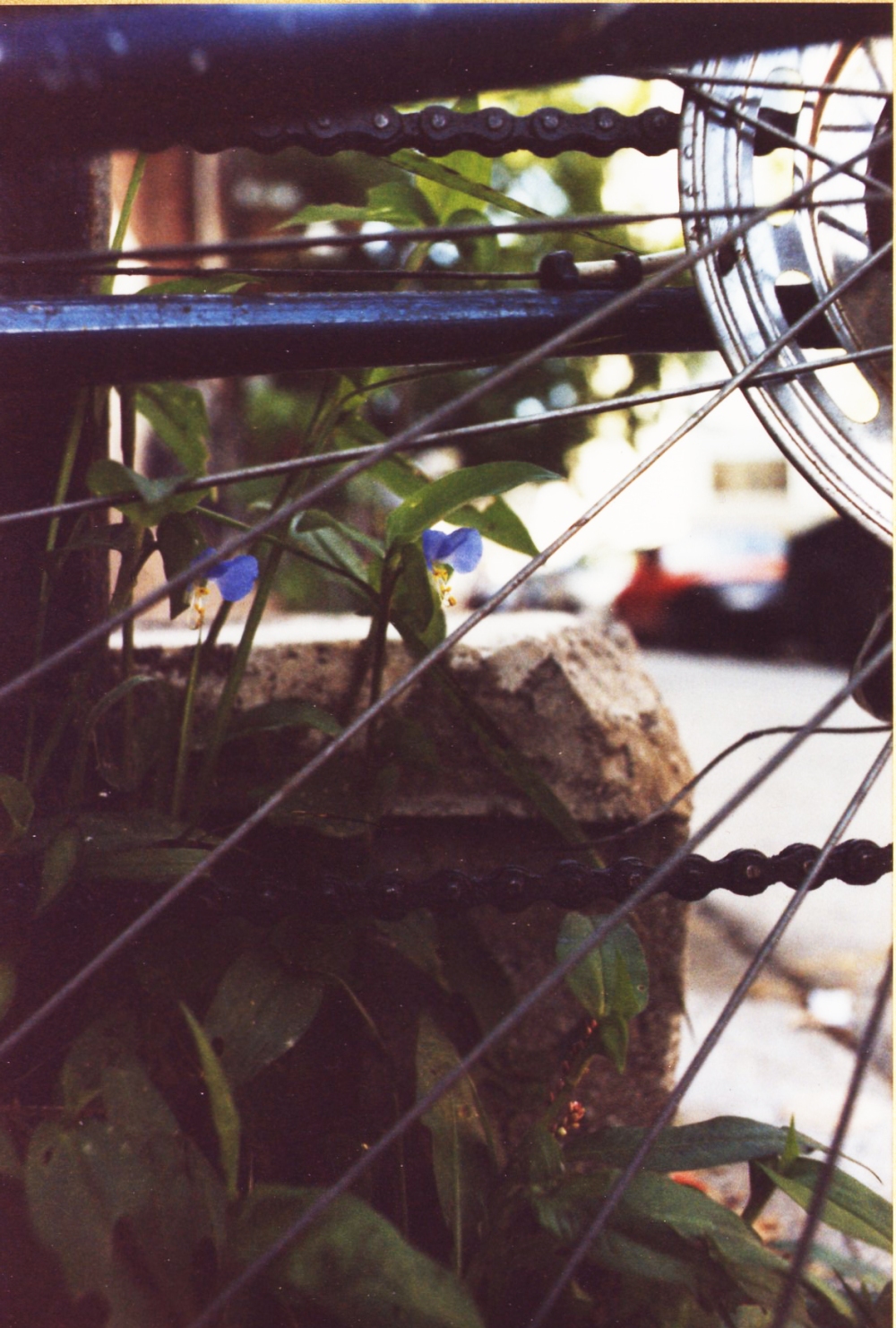 In an alley
The neatly stacked remains
Of an old woman’s life
Postcards from a fallen empire
Syringes, x-rays, medical things
And furniture, and clothes
Wooden chess pieces
Her death
Our gain

When I spoke of the fact
That our minds have spilled
All over the world
And we, like monkeys
With abacus thoughts –
She paused. Touched.

I kiss but
At times I am far from
The mother and child
And I wonder as I walk
“Where am I, then?”
Am I with the curry and rice?
The strawberries and ice cream?
Where? Where?

I dream
No answer but to dream
In torrents of time
As one place slams, a thunderclap
And another opens
A flower in moist
Dew-drenched morning.